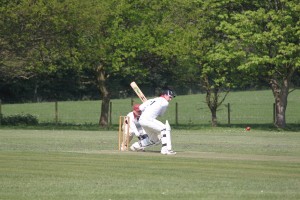 Well here we are, first match of the 2011 season and what a glorious day to start. Moxo won the toss by default and chose to bat first, having to take on the opener mantle with G as nobody else wanted to do it!

Moxo was the first to go for 12, skying a catch, the partnership putting on 26 in 6 overs. Tom joins G and they add 16 when G is bowled for 19. Cowlo starts in blocking mode but then unleashes a 4 and a 6 before calling for a 2nd run that wasn’t rally there and Tom is run out. Trev 1 lasts for a 7 ball single before he too is bowled – 58 for 4 off 19.

Oakesy hits 7 off 12 before being caught behind and then Hemang joins Cowlo and they add a rapid 15 before Cowlo is c&b for 32 (top score) – 93 for 6 off 17. Big T in at 8 and this partnership is our best, producing 40 runs in 8 overs. They fall to the returning opening bowler, both bowled for 26 and 17 respectively with Elton out LBW in the in between – 140 for 9 off 38. That leaves Arthur and Harry to see out the final overs which they do quite competently finishing 0 and 6 not out and the Wood have posted 149 for 9 off their 40. 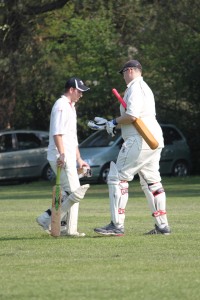 Following Big T’s tea (taking the 1st rather than the last this season) Mersham started their reply facing the bowling of Elton and Oakesy. They scored steadily at between 3 & 4 an over through several bowling changes that included Hemang, Big T, G, Harry and Trev 1 who, although being the most expensive took the only wicket – a caught behind – in the 25th over with the score on 123.

Mersham scored the winning run in the 29th over off Cowlo’s 4th ball – a rather comprehensive win for them by 9 wickets. Just a few of the better bowling figures – Oakesy 5-1-9-0, Hemang 5-0-13-0 and Harry 4-0-9-0. Sadly the Wood were unable to muster 11 players for the Sunday match at Etchinghill so this was cancelled – let’s hope that this is a one and only as we are now playing in the Regional League on Saturdays. 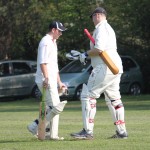 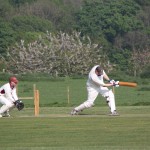 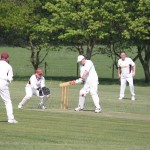 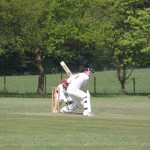 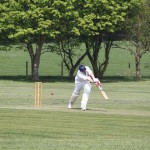 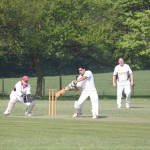 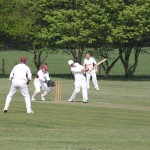 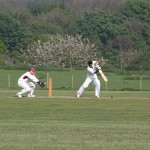