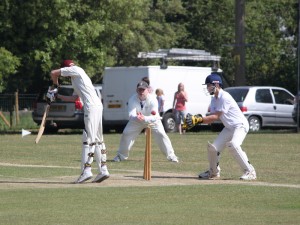 On another beautiful afternoon, Cowello won the toss and put Littlebourne into bat.  Our opening bowlers were Reedy &amp; Rose.  Reedy being very economical took the first wicket (bowled) 25 for 1 off 5.  Rose followed suit next over – 27 for 2 off 6.

Shaun almost took a slip catch in the 10th over to dismiss their No. 3 but the ball popped out as his elbow hit the ground – shocking  but fortunately it didn’t prove to be too expensive as he was caught behind (a fine take by Ben) 2 overs later – 48 for 3 off 12.

A change of bowlers, Macca for Rose, brought the next wicket, Cowello taking the catch off Macca’s first ball – 55 for 4 off 16.  Reedy, still keeping things tight, claimed his 2nd wicket – a G slip catch – 64 for 5 off 19.   Then his final over proved to be a double wicket maiden, Shaun hanging on to a catch, and Reedy bowling his replacement 1st ball – 88 for 7 off 23.

This heralded a double bowling change with G and Shaun taking over.G proved very miserly only giving away 2 singles from his 2 overs and Shaun cleaned up the tale – 1 wicket in his first over (bowled) – 102 for 8 off 26.  Then 2 wickets came off the last 2 balls of his second over, Ben again then Reedy taking the catches.

The decision was made for Saltwood to start their innings and to take tea at 4.15, G and Shaun our opening pair.  LB started with a maiden, then Shaun hit a 4 off his first ball, unfortunately that was the extent of his contribution this week as he was bowled 2 balls later – 4 for 1 off 2.

Cowello in next, hitting 2 boundaries before he too was bowled (he did face 15 balls) – 25 for 2 off 7.  T.W. replaced him only to fall victim to a rather dubious Cookie decision, given out caught behind for 7 – 40 for 3 off 10.  Ben in at 5, batting very well,finishing 30 not out and seeing the Wood home with G hitting the winning runs and getting his 50 at the same time.  We reached the 107 target of 23.1 overs – a very satisfying outcome.

A fine performance from Ben behind the stumps and with the bat, to go with Reedy’s immaculate bowling – well done. 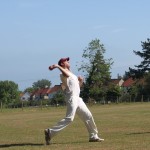 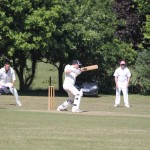 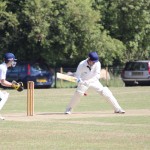 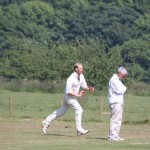 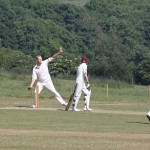 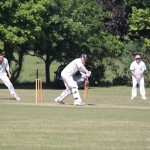 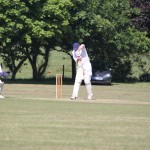 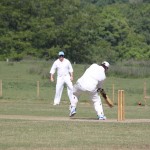 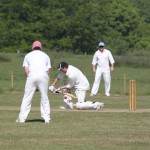 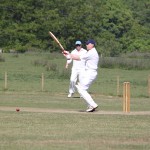 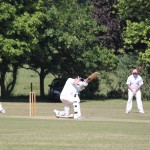 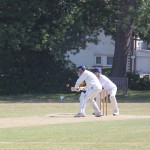 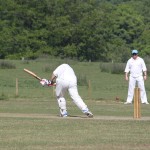