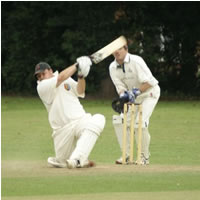 I’m afraid this is going to be rather brief as I’ve had to leave the score book in the “safe hands” of Baz as I will not be at the final match of the season. Hythe Green won the toss and asked us to bat first, we opened with Jez, still sporting a bruise from last week, and Shaun. Shaun and Jez both scored 7, Baz racked up an impressive 105 and there were also contributions from Cowello, Biff (49), Reedy and Tom. The Wood posting a score of 231 for 6, off 40 overs.

Reedy and Roachy opened the bowling for us, keeping it very tidy and restricting HG to a run an over for the first 6 and they both took wickets in their final overs. The double change brought on Biff and Tom, Biff taking two wickets in his 8. Baz and Cowello then took over with Baz taking a wicket and Lewso was brought on for the final over. Behind the stumps, Shaun took a catch, a stumping and had a hand in the runout off the final ball. Hythe Green finished on 176 for 6 I think so quite a handsome win the the Wood.