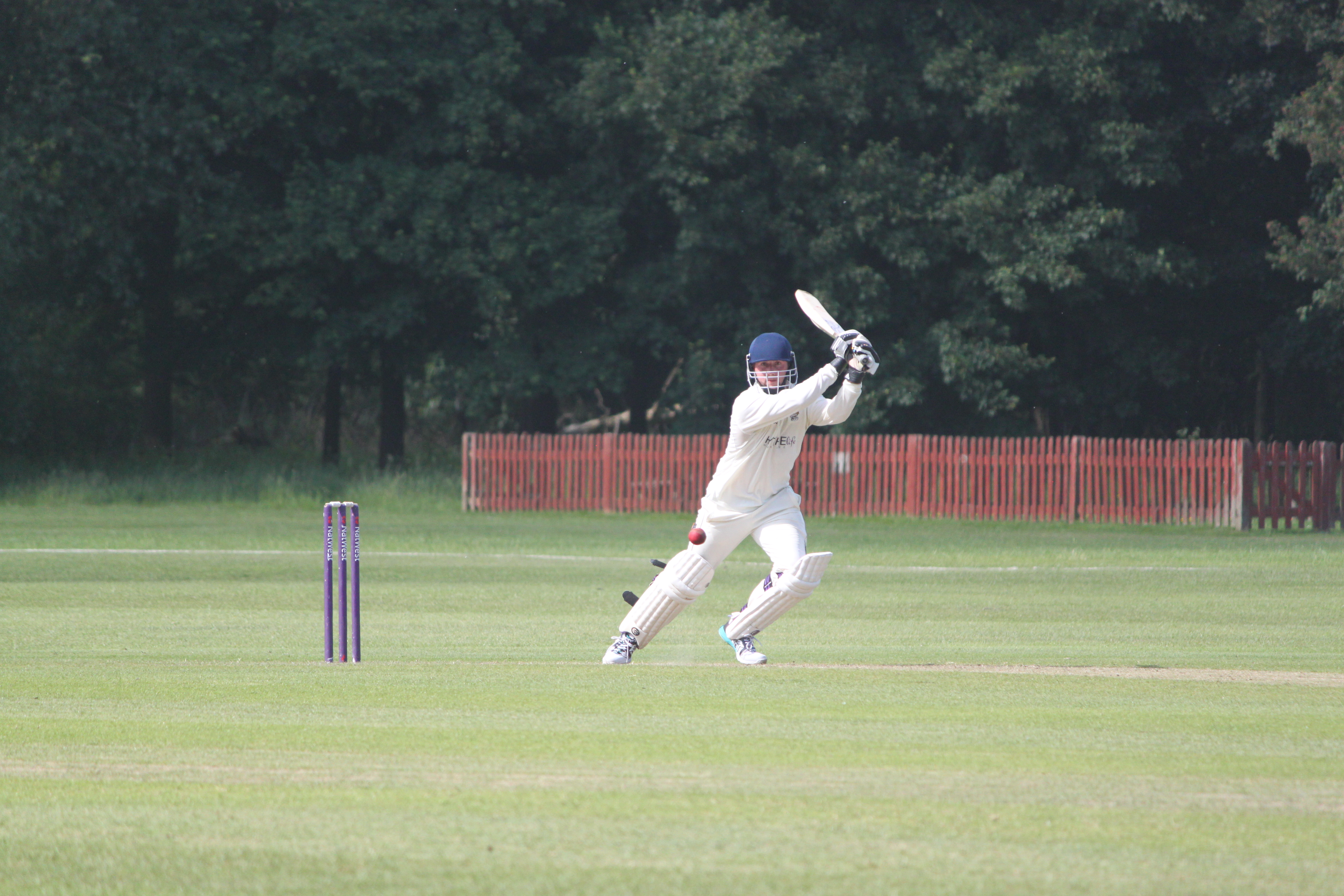 Saltwood made the short trip to Mersham CC on Saturday, keen to keep their winning run going. A nice early arrival, no one paid for parking, gentle stretches on the outfield and all was going well apart from Joey not turning up after a night time injury to his knee.

Despite Jack repeatedly saying that Mersham will bat first, they won the toss and had a bowl. Well done Nostradamus. After last week’s showing with the bat, Joey Pratt was promoted to open with the in-form Jamie Keeler. Sadly JK’s form didn’t last too long, snicking off to Matt Fagg in the third over for 1, narrowly avoiding the 10 point fantasy league penalty. Joey was joined by Ryan Hall, putting on a 49 run partnership to calm the early jitters in the SCC lineup. Hally departed for 18 in the 13th over, replaced by Dan Cowell who put on another 76 with Joey who fell to an LBW. Three people were padded up and waiting their turn, but skipper Teddy Easthope decided the conditions were right for Jack Dylan to swing the willow. It was a good decision as he hit 58 off 43 balls, putting on 56 runs in partnership with Dan who eventually fell for 52, bowled by Matt Fagg. Next up was Archie on debut, a Saltwood legend in the making. A few confident blocks to start and then the first of many runs for Saltwood. Archie’s innings was cruelly cut short by a suicidal run called by Jack. Archie out for 1, followed by Teddy for 11 and 6no for Harry Stafford. The assembled crowd sadly missed out on Brice Dempster’s sumptuous cover drives this week, but the sheik will be back next week for another go. SCC 232-6 off 40 overs.

Skipper Easthope turned to Dempster and Pratt to open the innings and was rewarded with a wicket in the second over, a quality low down catch in the slips by Ryan off the bowling of Joey. Mersham dug in and scored 44 off the next 10 overs before rabbit hunter Easthope decided to try his luck at some big game, making himself first change bowler. Just one run off his first over, followed by a wicket in his second and third.

Despite being mocked by the umpire, Teddy continued with his straight spinning darts for 7 overs, taking his 2 wickets for 19 runs. A few 20 runs starts for Mersham’s batsmen but no one went on to make the big big score that was needed to win. Jack picked up a couple of wickets to go with his 50 which will keep his fantasy points rolling in. Harry S had to wait a few overs longer than normal to send down his deliveries after Teddy’s performance, but he picked up another wicket to remain Saltwood’s leading wicket taker. 2 wickets for Ian Oakes from 3 overs and 2 wickets for Archie to close out the Mersham innings on 154 for 10 off 33 overs.

Even though he ran out Archie, for his 52 runs and 2 wickets, the Kent Ballooning Player of the match is Jack. Buy your flight online at www.kentballooing.com

Good game, looking forward to the return at ours. Thanks to Mersham CC, their scorer and umpire.