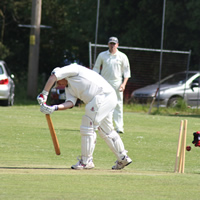 A rapid return fixture sees the Hill field some “stand-ins” from Folkestone following the trouncing last Saturday. This is a 35 over game, Baz won the toss, put the Wood into bat and we opened with Jez and Tom. Unfortunately Tom fell for a duck in the second over and we were 3 for 1. Cowello in at 3 faring only marginally better, being C&B for 6 after facing 8 balls – 14 for 2 off 4 – not the most promising of starts. Shaun up next and the pace starts to rise, the partnership adding 33 in 5 overs when Shaun is caught off a full toss (the cause of most of his downfalls this season ) for 17 – 47 for 3 off 9. This brings Baz to the crease for the start of our most productive partnership of 81, including Baz being dropped when on 46 , he is caught behind for 57 not long after though and we are now 128 for 4 off 20.

The Hill openers are S. Graham and R. Green and the Wood attack starts with Macca and Roachy – Roachy, wides to the fore again, is replaced after one over by Joey. The Hill are fairly racing along, at between 8 and 10 an over, as the ball crosses the boundary with frequent regularity 🙁 and it’s Macca who gets the breakthrough in his final over, bowling Green for 15 – 89 for 1 off 11. Oakesy is joined by Roach (bowling a lot better from the opposite end) and they are able to quieten the batsmen as they each take a wicket. Oakesy bowls his victim for 18 – 107 for 2 off 14 and then Cowello takes a catch off Roach next over as Nelson strikes – 111 for 3. S. Graham still there on 59 is now joined by N. Graham and they add 103 in 10 overs as several possible catches are dropped, including one to Jez that catches him a glancing blow on the cheekbone, felling him for several minutes and forcing him to retire hurt (Arthur on as sub – thank goodness for the Leavers).

Joey seems to be in possession of someone elses hands at the moment as his usual safe pair appear to have gone missing  Jez makes his “heroic” return to the field and Heman finally breaks the partnership when S. Graham is caught by Baz for 117 – 214 for 4 off 25 – but the damage has been done and N. Graham sees them home, hitting yet another huge 6 to win the match, the Hill finishing on 242 for 4 off 27.4 overs.