On Sunday 20th May, Saltwood traveled to Woodchurch CC for their first KVL game of the season. Due to lack of an Umpire Saltwood forfeited the toss and the Woodchurch captain had no hesitation in choosing to have a bat. Due to an unnamed players extensive lateness, Saltwood started the game with only 10 men. Harry Wren and Jack Gooding opened the bowling. The Woodchurch openers took full advantage of some loose bowling and exposed the gaps of the missing fielder and found themselves 25-0 off 3 overs. With the arrival of the 11th man came some changes in the bowling attack which stemmed the flow of runs and there became a constant loss of wickets. Woodchurch were eventually all out for 147. Wickets were shared between bowlers:

However it was the spin twins of Ryan hall and Harry Stafford (2 wickets) who were most impressive with the ball in hand. Both showing great control and maturity in tough spinning conditions.

After a tea that will be hard pushed to be beaten this year, Saltwood began the run chase. Unfortunately Arthur leaver fell early to a caught and bowled chance but then came a 50 run partnership between stalwart Jeremy Russell and young Harry Stafford (27). A steady flow of wickets saw Saltwood 82-6 at drinks. Enter Jack Gooding!!!

It was clear that Jack had other places to be and in true IPL style he dismantled the opposition bowlers and finished the game within 7 more overs, Scoring a fabulous 57* from 27 balls including 8 sixes. Tom Carr played a sensible innings at the other end and ended 15 not out. A fantastic start to the KVL season and a game where all had an opportunity to impact the game with bat or ball.

2 special mentions for the day: Tom Bean’s sumptuous on-drive and a fantastic wicket-keeping effort by Chris Fox in difficult conditions.

The runs continued to flow at SCC on Sunday in another high scoring game. Shah won the toss and decided to have a bowl, but hadn’t counted on Robert Miller launching an early attack on the Saltwood bowlers. By the time Miller (43) finally fell to Shaun Carey, his opening partner Matt W had notched up just 8 runs.

Matt fell to the returning Barry Wire with the total on 99-4 leaving Cowlo and Paul Rodway to form a partnership of 95. Tim W chipped in with 22 at the end, leaving Aldington very happy on 245-9 from their 40 overs. Pick of the bowlers – Shah 9 overs 4 for 38 and Barry 9 overs 4 for 24. END_OF_DOCUMENT_TOKEN_TO_BE_REPLACED

Brookland lost the toss so Moxo chose to bat – Joey & Tom were raiding Tescos to put together an emergency tea! We opened with Jezza and Biff and they steadily upped the run rate until it hit 5 an over for a while, but all good things have to end and this came in the 15th over when Jezza was caught for 18 – 63 for 1.

Lewso in at 3, hitting 9 off 13 and then being bowled – 81 for 2 off 19 – Biff on 48. Shaun joined Biff who notched his 50 2 overs later, but having got to 60 he succumbed to a father/son combination, being caught in the 24th over – 99 for 3. Sadly this was the start of a Wood collapse, not helped by some very erratic calling which surprisingly only brought about one run out (Amanda for 2). The only other batsman to reach double figures was Moxo who got to 19 and the Wood were all out for 151 (9 short of a batting point) – El Presidente being the 10th wicket to fall in the 38th over.

The Joey/Tom tea was a great success so huge thanks to them, also to Moxo’s mum and dad who kindly washed up afterwards. Biff and Tom opened the bowling for us but could not break the opening partnership. The introduction of El P finally made the breakthrough, getting an LBW decision from Brookland’s umpire – 104 for 1 off 18.

This second wicket partnership almost made it to the finish but El P struck again in the 24th over, bowling the No. 3 for 26 with only 4 needed to win. These were duly hit by Stanley the other opener who finished not out on 69. A rather comprehensive 8 wicket win in 24.1 overs. A mention for Big T who made some very useful stops in the field without which we would have finished even sooner and Biff who almost pulled off a diving one-handed catch but couldn’t quite hold onto it. 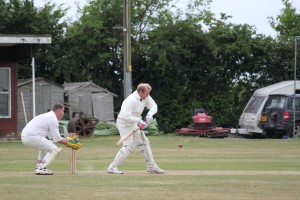 Walking from the cars to the Pavilion was not encouraging, the pitch did not look as though it was going to help our cause. We lost the toss with W&D chosing to bat first and we opened with Reedy and Macca. With the scoring rate nearing double figures a bowling change was quickly made, Baz replacing Reedy, and W&D settled slightly at 8 an over.

Hemang replaced Macca and it was not long before this change brought reward as he bowled the No. 4 for 2 – 115 for 3 off 22. He struck again with a Macca catch – 132 for 4 off 26 but the other opener was still going strong, having now reached 53.

W&D finished on 213 for 8 off their 40 overs with the Wood not having such a good day in the field with catches being missed and several fielding errors although the uneven pitch did not help. 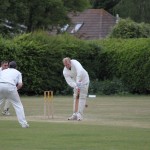 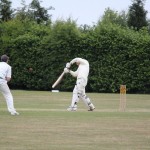 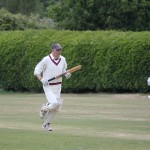 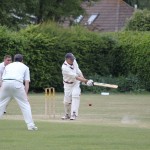 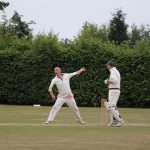 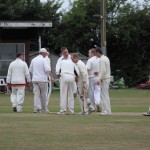 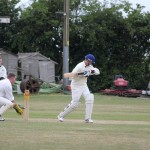 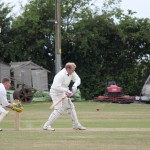 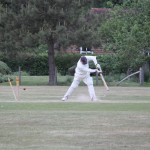 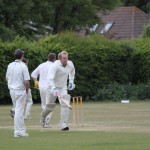 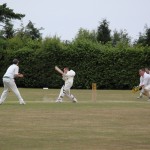 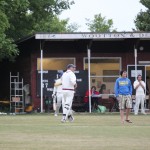